The Power of the Indigenous Vote in 2019

Riding-by-riding analysis of Power of the Indigenous Vote

Indigenous Politics (#IndigPoli) is pleased to present our analysis on the potential and Power of the Indigenous Vote in the 43rd Canadian Federal Election which should take place on our before October 21, 2019.

It was also important that in addition to talking about Indigenous voters and candidates, that we address real challenges Indigenous voters faced in exercising their rights to vote, this included getting around barriers that many felt were created by Fair Elections Act 2014. Indigenous Politics collaborated with form federal Indigenous candidate Tania Cameron and others to develop an Indigenous Voters Guide to assist Indigenous voters to map their way through the system and cast their vote.

The Power of the Indigenous Vote in 2019 with be a force to reckon with, politicians who don’t pay attention to Indigenous peoples, communities and issues, do as their own peril.

There is a lot of data that we plan on dissecting and analyzing over the next following weeks and months. If you would like to contact, e-mail us at indigpoli(@)gmail.com / www.indigpoli.blogpost.ca

A note on Methodology: We compared the Aboriginal indenity against that of the Canadian itendity for our numbers and analysis. Even though we may have a higher Canadian population, only Canadian Citizens can vote.
Sources for Information: Census 2016 Statistics Canada and Elections Canada

The Good Stuff - The Numbers!

For the moment, we will focus on the milestone numbers. The ridings between 5% population to having Indigenous peoples as majority in the riding. These are all ridings that can be influenced and even swing the vote in favour of their preferred candidate. Riding-by-Riding analysis will becoming very soon. We will also be considering other ways to slice and dice the data we have and to adding new analysis initiatives. 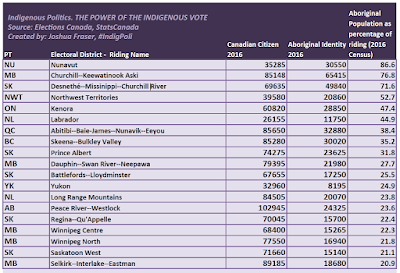 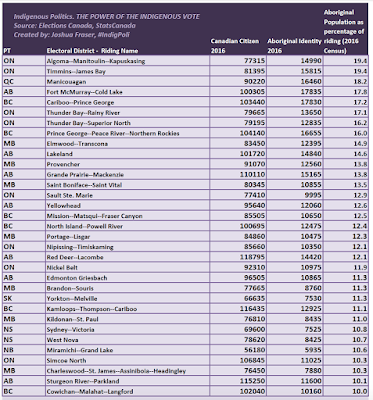 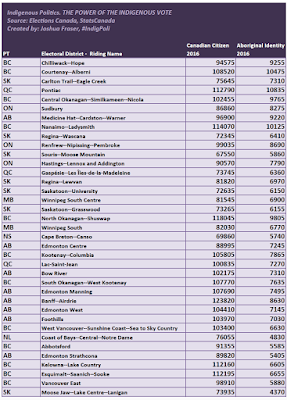 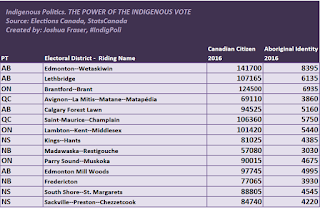 
Posted by Indigenous Politics at 15:58