2015 Election Results in Ridings with over 10% Aboriginal Population

The Indigenous Vote did make a difference in the 2015 Federal election.

In 2015 it has been stated and discussed that Indigenous (First Nation, Metis and Inuit) participation in the 2015 Federal Election has been unprecedented.  Eric Grenier who is the founder of poll aggregator threehundredeight website noted that the Indigenous voter turnout was up based on certain indicators.

We can state the uptick in Indigenous involvement in Canada federal election is real in terms of the sheer number of candidates that ran for nomination for various national parties, including a record 57 that were on the ballot. There were a further an addditional 20-plus Indigenous people who ran for their party’s nomination and were either unsuccessful or removed as a nomination candidate.

Assembly of First Nation’s National Chief Perry Bellegarde started a national call to action encouraging Aboriginal people to participate and get active in the federal election. During the AFN’s 36th First Nations AGM he stated “We have to harness that political power because members of parliament running, if they know that First Nations people don’t vote, they don’t really care about our issues…” (CTV). At the AGM, the AFN also released a list of 51 ridings that they thought should be targeted based on Aboriginal people’s ability affect the swing vote and outcome of the election.

This Indigenous Politics Blog founded by Joshua Fraser began tracking Indigenous candidates in early 2015, with the help of Pundits Guides, partisans and party operatives the blog tracked First Nation, Metis and Inuit candidates who were running for party nominations throughout Canada. This blog also focused on potential opportunity of the Aboriginal vote. Our approach was to look at the ridings that had an Aboriginal population of 10% or higher within the general Canadian citizen population of those ridings. The AFN focussed on 51 swing ridings. 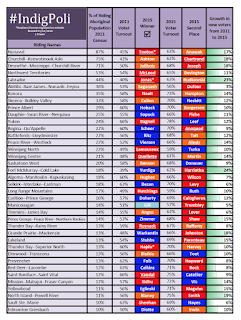 #Bythenumbers - In our #Top38 ridings

NDP
- 9 were elected in our Top 38 ridings
- 1 new Indigenous MP was elected, 1 re-elected and 1 lost his seat

BQ
- 1 Bloc Quebecois was elected in our Top 38 ridings

*Update:
-Ralph Goodale won in Regina-Wascana, not Regina-Qu'Appelle, SK
-Hayway is a Liberal who finished second in Provencher, MB

Posted by Indigenous Politics at 19:57