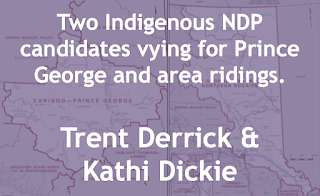 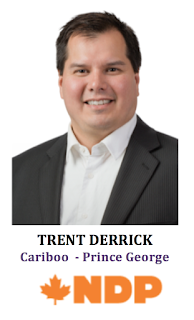 Trent Derrick is from the Gitxsan First Nation and is the NDP candidate for Cariboo – Prince George, BC.

Background and Experience
-Trent is a long time businessman and resident of Prince George, where he owns the Spa of the North. He has recently opened a Rocky Mountain Chocolate Factory in Prince George.
-He has been a team leader for various projects with the provincial and federal government.
-In 2014, Trent ran to be councilor of the City of Prince George garnering close to 4000 votes.
-He has a BA from the Taylor Univeristy College in Religion and Theology.
- His community experience includes volunteering for the Society of St. Vincent de Paul, working with at-risk youth and a baseball coach. 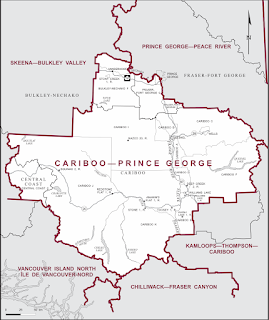 Riding History
- The riding changed slightly from the previous area riding of Prince George – Bulkley Valley.
- The previous Conservative MP Richard “Dick” Harris (1993-2015 is not running for re-election, which means there is no incumbent.
- Cariboo-Prince George has an Aboriginal population of 16.4% (2011 NHS) compared to total Canadian citizen population in the riding.

The riding is located in north central British Columbia. 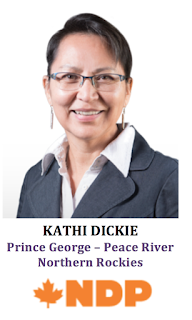 Kathi Dickie is from the Fort Nelson First Nation and is the NDP candidate for Prince George – Peace River – Northern Rockies, BC.

Background and Experience
- Kathi is currently serving a fourth term as councilor for the Fort Nelson First Nation. She previously served as Chief of the nation, the first female to do so. She is also the Education Director.
- She focused on economic development and employment, promoting the sustainable development of natural resource industry.
-Her community experience includes a home-school coordinator, she has volunteered for Fort Nelson Community Literacy, Citizens on Patrol and is involved with Minverva.
- Kathi has a BA and teaching degree from the Simon Fraser University and Holds certificates in Business Administration and Liberal Arts. 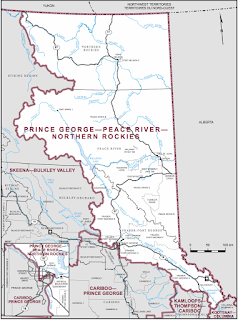 CLICK ON MAP TO ENLARGE
Riding History
- The former riding was called Prince – George Peace River, it was changed to it’s current name as part of the 2012 electoral redistribution commission.
- The incumbent and current Conservative MP is Bob Zimmer, one term MP who has served as the chaired his party’s BC/Yukon Caucus.
-Prince George – Peace River – Northern Rockies has an Aboriginal population of 13.5 percent of the total population. It is the only BC area that is part of the numbered treaties, being Treaty 8 territory and contains several First Nations communities.

Posted by Indigenous Politics at 18:37