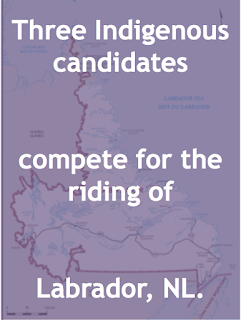 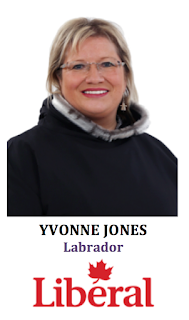 Yvonne Jones is Inuit-Metis (NunatuKavut) and is the Liberal Party’s candidates for the riding of Labrador, NL.

Background and Experience:
-Yvonne was elected to the House of Commons as a Liberal MP for Labrador in a by-election in May or 2013. She served as Vice-Chair of the Public Accounts Committee and was the Liberal Party Critic for Northern Development, Canadian Northern Economic Development Agency, ACOA and Search Rescue.
-Prior to her entrance in federal politics, she was the Leader of the Liberal Party of Newfound and Labrador and MLA for Cartwright-L’anse au Clair since 1996. She previously served as Minister of Fisheries and Aquaculture and Minister of Status of Women.
-Yvonne was also the former Mayor of Mary’s Harbour in Labrador. Her community experience includes volunteer work with Battle Harbour Development Corporation, the Combined Councils of Labrador, and the NunatuKavut. 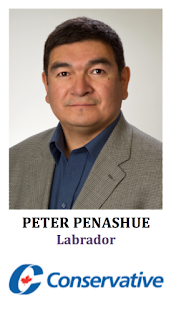 Peter Penashue is Innu and is the Conservative Party’s candidate for the riding of Labrador, NL.

Background and Experience:
-Peter was elected to the House of Commons in the 2011 election with a slim win of 79 votes over the Liberal incumbent. He was the first Innu person to serve as a Cabinet Minister for Intergovernmental Affairs and the President of the Queen’s Privy Council for Canada.
-He resigned in March 2013 due to allegations of irregularities in his campaign spending. He ran in the subsequent election in which he lost to Yvonne Jones.
-Peter was Grand Chief of the Innu Nation from 1990 to 1997 and again 2007 to 2010. He was also Deputy Grand Chief from 2007 to 2010.
-He was a Land Claims Director, Executive Director and Financial Administrator with the Naskapi Montagnais Innu. 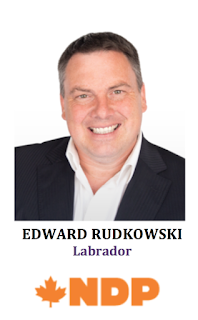 Edward Rudkowski is Inuit (Nunatsiavut) and is the NDP’s candidates for the riding of Labrador, NL.

Background and Experience:
-Edward is a senior financial professional who has worked for TD, BNP Paribas and the Bank of America and has worked in New York, Toronto and Sydney.
-He served on the Board of Directors for Them Days magazine, dedicated to documenting, promoting and preserving Labrador history and culture. He also volunteers at schools and as a sports coach.
-He has an M.B.A. from Dalhousie University and a Bachelor of Business Administration from St. Francis Xavier University. 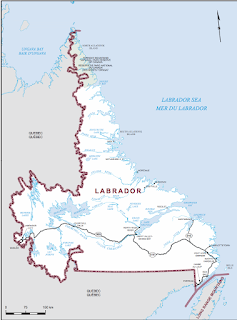 
Riding History
- Including MPs Yvonne Jones, Peter Penashue, Labrador has elected two former Indigenous MPs both Liberal: Todd Russell and Lawrence O’Brien.
- For the most it’s electoral history, Labrador has been represented by Liberal MPs, the exception being Conservative Peter Penashue and Progressive Conservative Ambrose Peddle.
- The Aboriginal population in Labrador is 44% of total Canadian Citizen population in the riding (2011 Census NHS). The Indigenous people include the Innu First Nations, Inuit and southern Labrador Inuit-Metis (NunatuKavut).


https://en.wikipedia.org/wiki/Labrador_(electoral_district)
Posted by Indigenous Politics at 19:37 No comments:

Two Metis leaders running for the Lakeland riding in Alberta

Posted by Indigenous Politics at 19:16 No comments: 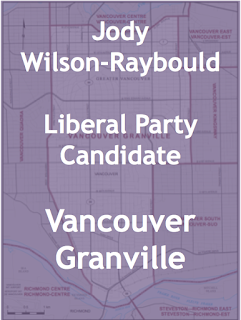 Jody Wilson-Raybould at home in the new riding of Vancouver Granville. 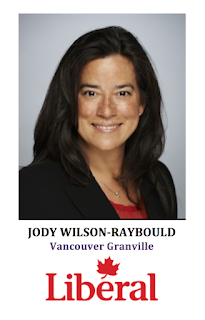 Jody Wilson-Raybould is Kwakwa̱ka̱’wakw and is the Liberal Party of Canada’s candidate for the new riding of Vancouver Granville.

Background and Experience
- Jody has a background in leadership and advocacy, most recently being the two-term Regional Chief of the Assembly of First Nations elected by 203 First Nations Chiefs in British Columbia. First elected in 2009, she was re-elected by 80% of the vote in 2012.
- In her role as BC Regional Chief, she held several portfolios including: Governance and Nation building, Chiefs Committee on Claims (reserve and specific claims) and chaired the Comprehensive Claims joint working group.
- She was elected as Commissioner of the BC Treaty Commission in 2004 by the First Nations Summit (BC), which she served for nearly seven years, over a year as acting Chief Commissioner.
- Jody was elected a council for the We Wai Kai Nation in 2009; she was appointed her nation’s representative to the First Nations Lands Advisory Board and was a member of the Finance Committee. She worked to develop the nation’s financial administration law. She was Chair of the First Nations Finance Authority (FNFA) from 2013-2015.
- She practiced law as Crown prosecutor in Vancouver criminal courthouse in the downtown eastside from 2000-2003. 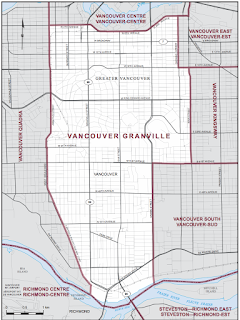 Riding History
- Vancouver Granville is a new riding located in central metro Vancouver created as part of the 2012 federal electoral boundary redistribution process.
- The riding was created from parts of Vancouver Centre, Vancouver Quadra, Vancouver Kingsway and Vancouver South formerly represented by two Liberals, one NDP and one Conservative MP respectively.
- Vancouver Granville has a fairly small Aboriginal population at 1.5% (2011), however it is a diverse riding with a sizeable Asian community.

Posted by Indigenous Politics at 19:22 No comments:

Posted by Indigenous Politics at 21:35 No comments:

Three Inuit leaders square to be the next MP for Nunavut 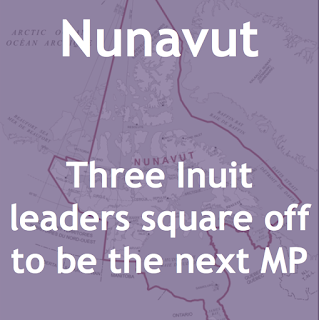 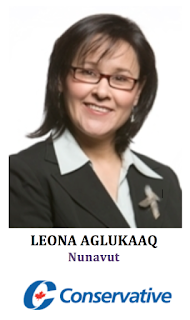 Leona Aglukkaq is Inuk from Gjoa Haven and is the Conservative party’s (incumbent) candidate for Nunavut.

Background and Experience
-Leona is the Minister of the Environment with additional responsibilities as Minister of the Artic Council and the Canadian Northern Economic Development Agency.  She previously served as the Minister of Health. She is the first Inuk Cabinet Minister in the federal government of Canada.
-She sponsored and passed a law that created the Qausuittuq National Park on Bathurst Island, Nunavut
-Leona was elected as MLA in the Nunavut Legislative Assembly in 2004 for the riding of Nattilik that includes Gjoa Haven and Taloyoak. She served as Minister of Health and Social Services and Minister of Status of Women.
-Prior to her political career, Leona served in various roles in the Nunavut and NWT governments, including Deputy Minister of various portfolios. 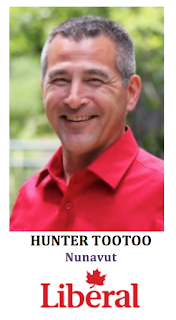 
Hunter Tootoo is Inuk from Iqaluit and is the Liberal Party of Canada’s candidate for Nunavut.
- He stepped down as Chairmen of the Nunavut Capital Corporation and has recently taken a leave of absence from Canadian North airline to campaign full time.
- Hunter was elected a Member of the Legislative Assembly for Iqualit Centre, he was re-elected in 2004 and 2008 and served till 2013. Nunavut Housing Corporation, Minister Responsible for Homelessness, Minister Responsible for the Qulliq Energy Corporation. He was also the Speaker of the Legislative Assembly.
- He has served on the boards of several organizations including: Northwest Territories Co-op Business Development Board, the Sport North Board of Directors, and Arctic Co-operatives Ltd.
-Prior to his work in the public sector, Hunter was a businessman and co-founder of the Iqaluit branch of Arctic Insurance Brokers Ltd. 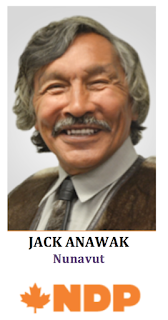 Jack Anawak is Inuk from Naujaat and is the NDP candidate for Nunavut.
- He was a Liberal MP for the former riding of Nunatsiaq (now Nunavut) from 1988-1997.  He was the Liberal Party’s Opposition Critic on Northern Affairs. When Jean Chretien’s Liberals won the 1993 election, Jack was appointed Parliamentary to the Minister of INAC.
- He was elected as an MLA for the Nunvaut Assembly for the riding of Rankin Inlet, He served as Minister of Justice; Community Government; and Culture, Language, Elders and Youth.
-He served He has also served as councilor and Mayor of Ranklin Inlet.
- Jack was the Vice-President of Nunavut Tunngavik Incorporated. Anawak is a former President of the Keewatin Chamber of Commerce.

Scott  Rochhi is the Green party candidate for Nunavut. 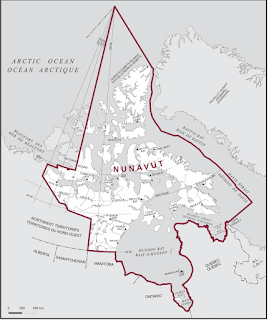 Riding History:
- Jack Anawak was a former Liberal MP, Hunter Tootoo was an NDP candidate beaten by Nancy Karetak-Lindell.
- The riding started off as Nunatsiaq when Nunavut was part of the NWT, it later turned into the riding of Nunavut.
- The riding has a history of electing Inuit MPs and facing off against Inuit candidates from the other parties. Elected to date: NDP/Liberal Peter Ittinuar, Progressive Conservative Thomas Suluk, Liberal Jack Anawak, Liberal Nancy Karetak-Lindell and most recently Conservative Leona Aglukkaq.
- The Aboriginal population of Nunavut is 86.9% within total Canadian Citizen population (2011 Census). Nunavut is the riding that has the Aboriginal population compared to total.

https://en.wikipedia.org/wiki/Nunavut_(electoral_district)
Posted by Indigenous Politics at 20:21 No comments: