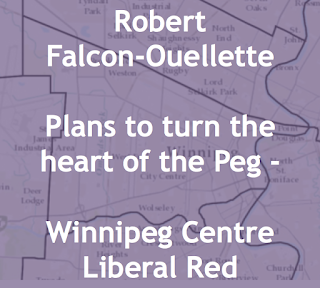 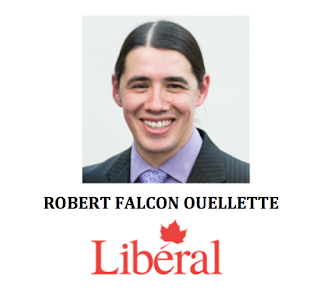 A relative unknown in political circles until he entered the 2014 mayoral election for the City of Winnipeg, Robert Falcon Ouellette (or by his twitter handle DrRobbieO) came in third place for Mayor. Métis Brian Bowman would go on to win the race for Mayor of Winnipeg. 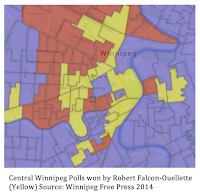 Winning many inner-city polls (yellow in image above), he attributed his success to attracting many non-traditional voters including Aboriginal people, marginalized people, youth and folks who generally didn’t vote in municipal elections. Find out Robert Falcon Ouellette social media contacts on our Liberal candidates page.

Before he ran for mayor and now federal Liberal candidate, Robert was already an accomplished man. Robert is Cree from the Red Pheasant First Nation.

Background and Experience:
-Current Program Director for the Aboriginal Focus Program at the University of Winnipeg.  He works on issues related to university entrance programs, Indian Residential Schools, the military and music.
-Falcon-Ouellette has over 15 years of service in various units from combat, medical and even musical military organizations. He retired from the military as the Sgt at Arms of the 5th Field Ambulance based in Valcartier, Quebec.
-He earned his PhD in 2011 from Laval University, his PhD (Laval University) specialized Evaluating Aboriginal Curricula using a Cree-Métis Perspective with regard towards Indigenous knowledge. 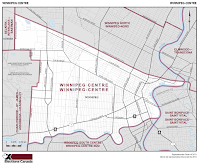 Riding History
Robert has a challenge facing veteran NDP MP Pat Martin who has held Winnipeg Centre since 1997 who will have served 18 years by the time the expected fall federal election is called.

The riding has an Aboriginal population of 13,720 or 20.7% (2011 census), if Robert can mobilize the Indigenous vote, retain and build on the coalition of supporters he has from his mayoral campaign he has the ability to take the heart of Winnipeg for the Liberal Party of Canada.

Posted by Indigenous Politics at 20:25 No comments:

North Vancouver - Will Carleen Thomas turn riding NDP Orange for the first time in its history? 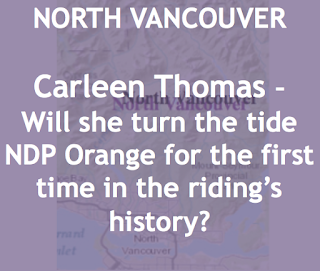 North Vancouver: Carleen Thomas
Will She turn the tide NDP Orange for the first time in the riding's history? 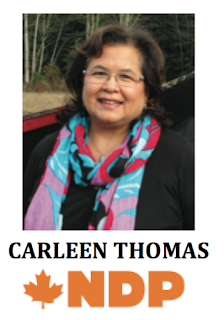 It’s been a while since we have blogged about one of the candidates we are profiling within our blog. One of these reasons being is that we are waiting for candidates to be nominated. If another candidate is Indigenous that changes the approach to how we profile these candidates.

Today we are profiling Carleen Thomas who is the NDP candidates for North Vancouver.  Carleen is from the Tsleil-Waututh Nation on the west coast of Vancouver.
Experience and Accomplishments:
·    - Carleen brings great leadership skills to the table and would be an asset to the NDP; she has been elected Tsleil-Waututh Nation Chief and Council eight terms of 16 years.
·    -  She held various leaders roles for her nation, such as Community Development, Manager of Education, Community Engagement Hub to name a few.
·    -  She has also been her nation’s representative on the Nautsamawt Tribal Council, North Vancouver School District, Capilano University and Simon Fraser University.
·    -  Carleen has worked as a member of Tsleil-Waututh Nation’s Sacred Trust Initiative, opposing Kinder Morgan Trans Mountain Pipeline expansion.

You can find Carleen's social media contacts on our Indigenous Candidates page. 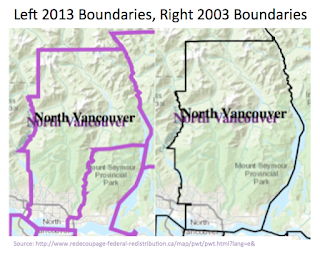 The riding has a history of electing Conservative MPs, however the Liberals did take the riding for a short stint and generally coming second place. That being stated, we just witnessed provincial NDP candidates win in Calgary and indeed within Prime Minister Stephen Harper’s riding.

Candidates running for other parties:

If you have comments or suggestions, please let us know.
Special thanks to Pundits Guide who keeps an extensive database on candidates.

Posted by Indigenous Politics at 19:39 No comments: