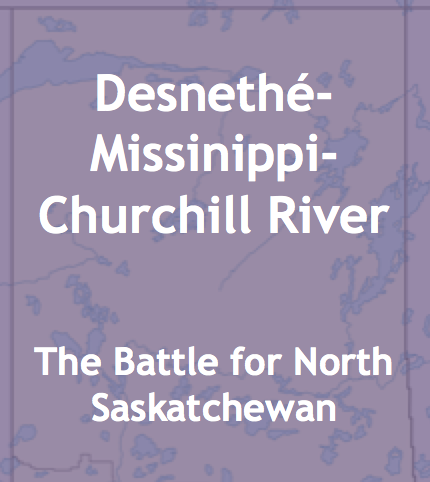 As we march forward to the upcoming federal election, scheduled for October 2015, political parties are going through nomination meetings and choosing their banners representatives (or candidates) to run in one of Canada 338 federal ridings.  Desnethé-Missinippi-Churchill River or “DMRC” for short unlike most other western rural ridings has a history electing MPs from the three major parties.

The upcoming election in DMRC, or the [Political] The Battle for North Saskatchewan will promise to be an interesting contest as three First Nations candidates with strong background in the riding and impressive resumes work to get elected in this huge riding that has a significant First Nation and Metis population.

The riding has the third largest Aboriginal population compared to the Canadian citizen population with 70.9% being First Nation, Metis or Inuit.

The Candidates for Conservatives, Liberals and NDP 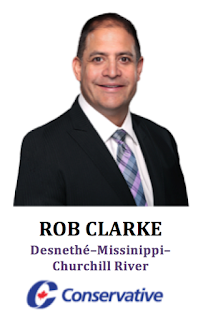 Rob Clarke
Rob has been the Member of Parliament for Desnethé-Missinippi-Churchill River since winning a by-election in 2008 representing the Conservative party. Rob is Cree from the Muskeg Lake Cree Nation (SK).
Experience and Accomplishments:
-Sponsored controversial Bill C-428 Indian Act Amendment and Replacement Act which is now law
-Eighteen-year veteran of the RCMP worked in several communities throughout Saskatchewan
-RCMP Commissioners Commendation for Bravery during the 2006 shootings in Spiritwood, SK
-Participated on various community boards including Victim Services, Restorative Justice, Interagency, and Police Management Boards 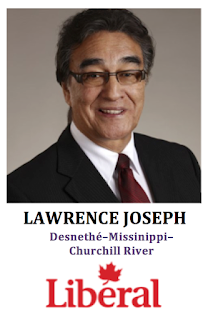 Lawrence Joseph
Lawrence is the Liberal party candidate for Desnethé-Missinippi-Churchill River for the upcoming federal election, which is scheduled to be called in October of this year. Lawrence is Cree (fluent in Cree) from the Big River First Nation (SK).
Experience and Accomplishments:
-Served three terms as Vice-Chief and one term as Chief of the Federation of Saskatchewan Indian Nations (FSIN) holding multiple portfolios (Lands & Resources portfolio, Justice Commission, Saskatchewan Indian Gaming and Licensing, Health and Social Development portfolios)
-Had an active political Career in Prince Albert, which included trustee and as Vice-Chairman of the Prince Albert Public School Board of Education. He served two terms as Alderman for Prince Albert, including Acting Mayor.
-Lawrence has a distinguished record in the Canadian Military, at the age of 17; he reached the highest rank with the All Indian Air Cadet Squadron #590 (Warrant Officer II). He served in the Royal Canadian Army (Militia) 44th Battery (Artillery Unit). He was also a civilian instructor with the National Defense Department. He received the Queen’s Commission in the Royal Canadian Air Force (Reserves). He was commissioned at the rank of Pilot Officer, but was immediately promoted to Flying Officer. 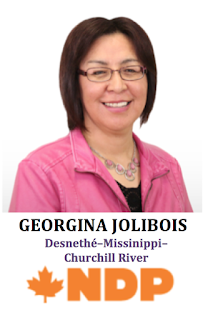 Georgina Jolibois
Georgina is running and will be acclaimed as the NDP candidate for Desnethé-Missinippi-Churchill River. Georgina is Dene (fluent in Dene) born and raised in the northern village of La Loche (SK).
Experience and Accomplishments:
-Mayor of La Loche since October 2003. Earned her degree at the University of Saskatchewan. She successfully negotiated a first ever exploration agreement with Oilsands Quest in 2008 to allow the northern village of La Loche to engage in discussions with industry and Saskatchewan government in supporting a regional environmental committee.
-Georgina has a wide array of different interests in Economic Development, Social Change and Globalization, Impact on Women and their Families due to Economic Growth, Dene Language and Culture and Youth Engagement.
-She is the current chairperson of the Saskatchewan Association of Northern Communities, a northern-wide lobby group for the northern municipalities.

In the past eighteen years the riding has been represented by each of three major federal parties.  The Churchill River riding was recreated in 1996 from the former federal ridings of Prince Albert, Churchill River, Mackenzie and The Battlefords-Meadow Lake. As a result of the 2011 Canadian Census the government undertook to create the Federal Electoral Boundaries Commission, an independent commission tasked with re-balancing the current ridings to ensure a relatively balanced population per federal riding. In addition due to the population grown, migration and immigration news seats were added: fifteen more seats in Ontario, sex in British Columbia, six in Alberta and three more in Quebec.

Some ridings undertook significant geographic changes, however “DMRC” changes were limited in scope, losing a small portion of the lower half of the riding. The current riding is huge, representing roughly half of the physical map of Saskatchewan. Unlike many other western rural ridings, DMRC can have close races by separating the winning candidate over the challenger, such as 794 votes in 2011 or 68 votes in 2006.

Not surprising, a number of indigenous candidates were candidates for their party and a few of them got elected.

Rick Laliberte was elected in 1997 as an NDP MP, same year as Nancy Karetak-Lindell (Inuit) was elected in Nunavut. Rick crossed the floor to the Beauval, Saskatchewan, previously he was a school administrator who spoke fluent Michif (Metis language). Rick crossed the floor to the Liberal party in September of 2000; he was reelected in subsequent 2000 federal election as a Liberal. He ran one more time as Independent in the 2004 election coming in 4th place.

Gary Merasty (First Nation) was elected in 2006 as a Liberal MP, same year Tina Keeper (First Nation) won in the neighboring Manitoba vast northern riding of Churchill. His previous experience including two terms Grand Chief of the Prince Albert Grand Council and has been a businessman and consultant. He is from Peter Ballantyne Cree Nation. He resigned as MP after serving for roughly a year and half.
Rob Clarke (details above) was elected in 2008 along with Leona Aglukkaq (Inuit) in Nunavut and Shelly Glover (Metis) in the Saint Boniface riding in Manitoba, all as Conservative MPs.

We will be watching this race closely and will be providing updates.

Warren Koch is the Candidate for the Green Party of Canada

Posted by Indigenous Politics at 20:24